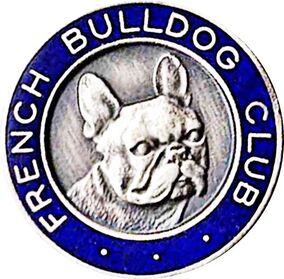 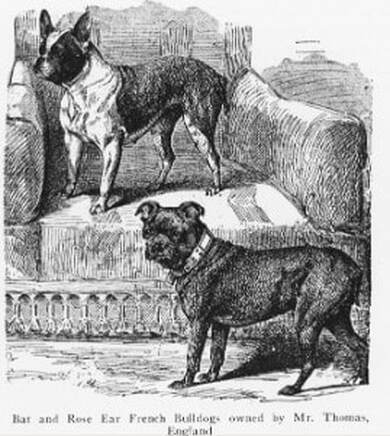 Blood sports such as bull-baiting were outlawed in England in 1835, leaving the "Bulldogs" unemployed, so to speak, however, they had been bred for non-sporting reasons since at least 1800, so their use changed from a sporting breed to a companion breed. By 1850, the Toy Bulldog had become common in England and appeared in conformation shows when they began around the late 1800’s
In Nottingham, lace makers kept toy-size bulldogs to chase away rats in their small working quarters. During the height of the Industrial Revolution the lace workers were replaced by machines, so many were forced to relocate to France, where lace was still made by hand. The French fell in love with the smaller bulldog and soon every artist, actor, and celebrity in the city wanted one. Americans visiting overseas loved the miniature version of the bulldog, and it wasn't long before Frenchies took off in the U.S. as well. The dogs were highly fashionable and were sought after by society ladies and Parisian prostitutes alike, as well as creatives such as artists, writers, and fashion designers. Those lace makers returned to England with their small bulldogs and in the early days of the breed, there were two types of ears on Frenchies:
the bat style and the rose ear commonly seen on the bulldog
************************************************************************************
Early records of the FBCE shows that our breed may have been given another name. The
choices put forward to the Kennel Club of the day were in order of preference, The French Bulldog, Bulldog (French Type),Bouledogue Francais or the Bat Eared Bulldog. This last suggestion even had a cartoon printed in ‘The Stock-keeper’ a newspaper of the day (See image below) poking fun at the bat ear, no doubt drawn by someone who opposed the introduction of another type of Bulldog 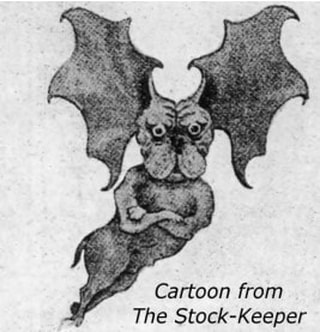