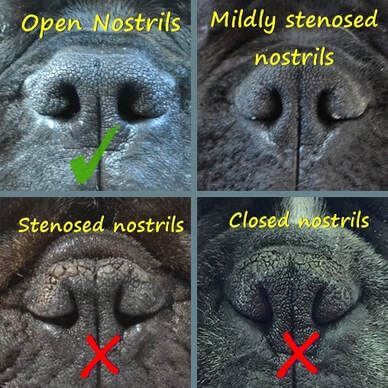 Judges must take conformation related health problems and temperament into account when making their decisions, as well as breed type.
Judges must ensure that all show dogs are fit and healthy and that prizes should never be awarded to dogs which are visibly suffering from any condition which would adversely affect their health or welfare.

Click here for Kennel Club  Breed Watch  details - Particular points of concern for individual breeds may include features not specifically high lighted in the breed standard including current issues.In some breeds,features may be listed which, if exaggerated, might potentially affect the breed in the future.
Points of concern for special attention by judges for the French Bulldog
Breathing difficulties    click here to hear what a dog with BOAS sounds like
Pinched nostrils
Very prominent eyes and incomplete blink
Irregular bite i.e. overshot, level or wry
Overly short neck – predisposes to breathing problems
Screw tail, lack of tail, inverted or tight tail
Exaggerated top line
Signs of dermatitis

Introduction:
French Bulldogs are the descendants of a dwarf version of the Bulldog, and there are some structural anomaly present associated with the breed's conformation. French Bulldogs are classified structurally and developmentally as a brachycephalic and chondrodystrophic breed.
A Frenchie skull typically has a short face compared to the length of the cranium; and the other bones in the skeleton show an abnormal type of development, chondrodystrophy which results in a shortening of the vertebrae and of the long bones of the limbs. The chondrodystrophic  brachycephalic skeleton,though characteristic of this and other breeds, is structurally atypical, with the potential to cause some inherent physical problems.

The health status of the breed is under constant surveillance and the FBCE is committed to taking action,  to ensure the breed's health is not compromised as a consequence of exaggeration.

This guide should be read in conjunction with the Breed Standard to explain what judges should expect to find when examining a healthy Frenchie in the show ring. The Kennel Club does not expect judges to apply the knowledge or level of diagnosis that a vet would be capable of.
We however do expect our judges to be knowledgeable about the anatomy and sound movement of the breed and,  to be able to recognise potential health and welfare issues in the ring and judge accordingly.


If you suspect that nostrils have been surgically enlarged, please refer to he show vet for confirmation, you should withhold any award .

GAIT/MOVEMENT: Free and flowing. Soundness of movement of the utmost importance
The French Bulldog is light on its feet for a heavy built dog, with a gait which is flowing, quick and vigorous,  smooth, and  lively
As with all breeds of dog, the legs both front and rear will attempt to converge towards the midline (single track) as the dogs moves from a trot to a faster speed in order to minimise the body rolling from side to side caused by lateral instability.
Seen coming towards you at the trot, the Frenchie will endeavor to single track, but is at a disadvantage to do so because of his wide chest and relatively short legs The front legs move as a straight line, attempting to converge but only very slightly. The rear legs are set closer together than the front, and should be just visible through the front legs. When the dog is coming forward, the rear feet travel inside the line of the front feet , hind paw prints falling inside of the front paw prints, resulting in two tracks of  prints.
Viewed from the side, the dog should use forelegs and rear legs with equal efficiency. the  top line is maintained, and there is no undue undulation There is a gentle sway to the rear caused by lateral instability
Key Health Points
Emphasise must be placed on sound movement , soundness of movement encompasses more than just locomotion. To move, the dog must be able to breath easily, so he must have good airways and he must be constructed correctly ie good spine, neck etc
The French Bulldog’s gait requires strength and firmness of back as the thrust of the rear quarters is transmitted through the back to the front assembly, the moderate angulation and relatively short body go together to produce a medium length stride without the back and front feet interfering with each other.
Lameness may be an indication of an underlying muscle or skeletal health issue
Inability to walk without skipping or missing steps in the rear legs may be an indication of Patellar Luxation
A wobbly, or unsteady, hind gait may be an indication of a back problem or other musculo-skeletal issue
Twisting of the lower ends of the radius and ulna or tibia and fibula due to uneven growth of these pairs of bones may lead to various signs standing or on  the move - protruding elbows, bow legs  or pinning - and this could lead to weakness and injury
---------------------------------------------------------------------------------------------------------------------------
COAT Texture fine, smooth, lustrous, short and close.
Key Health Point
Thin patches, or areas of baldness may indicate an underlying skin or medical condition
COLOUR
All acceptable coats shades should be lustrous brilliant and clear,  with a good depth of colour , never giving a grey, blue or muddy appearance.
Shades of fawn may vary, very pale fawn may loose the black pigmentation of the nose, eye-rims and nails which is highly undesirable.
Key Healthy Point
The dilute colours Blue and  liver with their various patterns are unlikely to be seen in the UK show ring, but are associated with Colour Dilution Alopecia
____________________________________

SIZE: Ideal weight: dogs:12.7kg (28 Ib); bitches:10.9kg (24Ib). Soundness not to be sacrificed to smallness.
A Frenchie meeting the above should be in the vicinity of 10 - 11  inches (26.5 -28 cm), whereas a dog towards the upper end of the weight range (30lbs) could be nearer 13 inches (33cm), when measured at the withers, The French Bulldog is a small dog and maintaining the correct size  with soundness, balance and  proportion is most important. A 10% variation in weight (22 - 26lbs for bitches and 26 -30 lbs dogs)  above or below the ideal is acceptable
Key Health Points
If you can: easily feel the ribcage and  the spine. The dog is too thin and undernourished .

Dismissing a dog on the grounds of health or welfare:
Regulation F(1)21n. Judges and Judging
Judges may exclude any dog from the ring if it is considered not in a fit state for exhibition owing to savage disposition or suffering from any visible condition which adversely affects its health or welfare and the exclusion must be reported immediately by the judge/steward to the ShowSecretary. The judge’s decision is final and the dog shall be excluded from all subsequent competition at the Show. The judge must make a report to the Show Secretary at the first opportunity after the Show.

KC Regulations, Breed Standard clauses and Declarations relevant to Health.:
1. Regulation F.9 (2007)
In assessing dogs, judges must penalise any features or exaggerations which they consider would be
detrimental to the soundness, health or well being of the dog. All dogs must be able to see, breathe,
walk and be free from pain, irritation or discomfort.
2. Judge’s Declaration on Challenge Certificate (June 2007)
Having assessed the dogs and penalised any features or exaggerations which I consider detrimental to
their soundness, health or welfare, I am clearly of the opinion that ... is of such outstanding merit as to
be worthy of the title of Champion.
3. Regulation F(1)21n. Judges and Judging (January 2009)
Judges may exclude any dog from the ring if it is considered not in a fit state for exhibition owing to
savage disposition or suffering from any visible condition which adversely affects its health or welfare
and the exclusion must be reported immediately by the judge/steward to the Show Secretary. The
judge’s decision is final and the dog shall be excluded from all subsequent competition at the Show. The
judge must make a report to the Show Secretary at the first opportunity after the Show.
4. Regulation F(1)15b. Exclusion of Dogs (January 2009)
If the show executive receives a report from a show official or Kennel Club official of an apparently
visibly unhealthy and/or unsound dog, the dog will be referred to the show veterinary surgeon and if
the allegation is upheld the dog will be excluded from subsequent competition at the show. For example
if the dog in question had been awarded Best of Breed, it would be excluded from the Group
competition.
5. Introductory Paragraph to All Breed Standards (January 2009)
A Breed Standard is the guideline which describes the ideal characteristics, temperament and
appearance of a breed and ensures that the breed is fit for function. Breeders and judges should at all
times be careful to avoid obvious conditions or exaggerations which would be detrimental in any way to
the health, welfare or soundness of this breed. From time to time certain conditions or exaggerations
may be considered to have the potential to affect dogs in some breeds adversely, and judges and
breeders are requested to refer to the Kennel Club website for details of any such current issues. If a
feature or quality is desirable it should only be present in the right measure.
6. Universal Fault Clause in Every Breed Standard
... the seriousness with which the fault should be regarded should be in exact proportion to its degree
and its effect upon the health and welfare of the dog.
7. Withholding of awards
You may withhold awards if in your opinion an exhibit lacks sufficient merit. Remember; if you
withhold third in a class, you must withhold all subsequent awards in that class.